With historic charm, iconic landmarks, and welcoming businesses, Centretown is a filmmaker’s dream. The area was mostly developed between 1890 and 1914 to house Parliament Hill and other government workers. While stunning Victorian homes still line the streets, today they house more than political staffers. Attracted by its central location, liveliness, green space, and more, Centretown has become a desirable neighbourhood for university students and adult professionals. The commercial and residential streets also regularly host film and television productions due to their natural ability to double for other cities, although Centretown truly shines when it’s playing itself.

We start our film tour on Spark St., a pedestrian mall since 1967 and the first in Canada. The street is lined with historic buildings housing everything from restaurants to government offices, providing a picturesque backdrop any time of the year.

Many film and television productions have filmed on Sparks St., and the area often attracts travel and history shows showcasing Ottawa’s beauty or investigating its biggest mysteries. In early 2020, the Lifetime movie Christmas Unwrapped, which is set in New York City, filmed outside Howard Fine Jewellers. The film was produced locally by 1 Department Entertainment Services and executive produced by Tiffany Haddish.

Our next stop is a few blocks away on bustling Slater St. Billing itself as Ottawa’s first lifestyle boutique hotel, Arc The.Hotel offers its guests comfort and luxury with a hint of creativity where you’ll find local art adorning the walls.

Some of the films that have shot at the hotel include Obsession: Her Final Vengeance, the final instalment in Lifetime’s Obsession trilogy (the two previous films were also shot in Ottawa), and local filmmaker Adrian Langley’s feature Crook, starring Adam Beach.

The MacDonald Building at 123 Slater St. is a sought-after location for all types of productions, especially those set in large cities as the elegant glass façade offers a quintessential metropolitan look. The office building is managed by Metcalfe Realty and contains a variety of organizations, like Impact Hub, Community Foundations of Canada, and Welch LLP (which has also hosted film shoots).

Several productions have filmed here, both interior and exterior, including the Lifetime movies Was I Really Kidnapped (produced by Ottawa’s Fireside Pictures), A Storybook Christmas, and The Mother She Found Online. 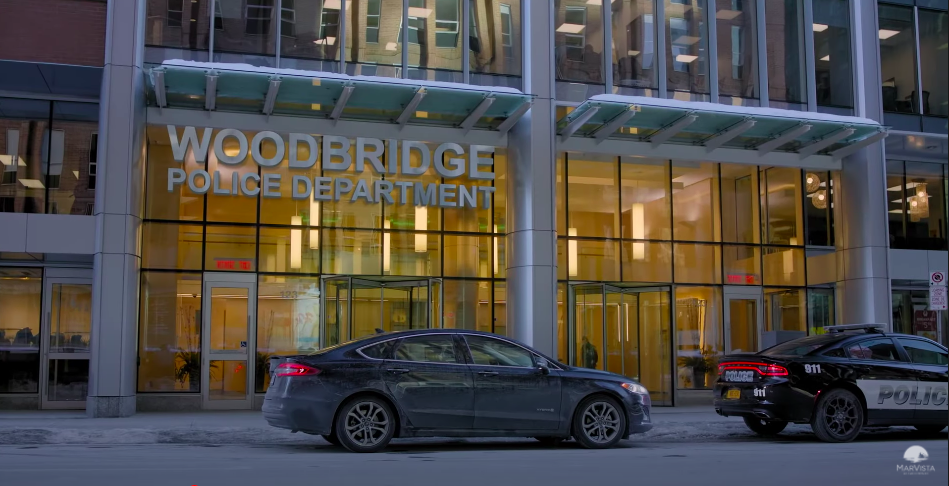 Just around the corner at the intersection of Metcalfe St. and Laurier Ave. West sits the Ottawa Public Library’s main branch. The Main Library, opened in 1974, is the OPL’s largest and busiest branch. The library is currently working with Library and Archives Canada to create a new, state-of-the-art Central Library, set to open at LeBreton Flats in 2024; visit the project’s website for details and updates.

While we’re confident the remarkable new building will attract filmmakers, the older building on Metcalfe is no stranger to productions. Back in 2016, the thriller Awakening the Zodiac, produced locally by Bunk 11 Pictures, filmed scenes at the library; the film is currently available to watch on Crave. The second season of the CBC series Michael: Every Day also filmed here.

Escape the busy downtown Ottawa streets by heading to Confederation Park, located just a block east of the library. The park was opened in 1967 to celebrate Canada’s centennial, and today is a popular site for major events such as Winterlude and the Ottawa International Jazz Festival. Years before becoming a public park, the site was home to The Arena (also known as Dey’s Arena), an ice hockey arena where the Ottawa Senators played from 1908 to 1923.

Whether portraying Ottawa or a larger city like New York, Confederation Park is an attractive location for filmmakers seeking an urban park setting. The park was recently featured in Lifetime’s Christmas Unwrapped; it also appeared in Zed.film’s Trust No One (a.k.a. Corrupt), the first season of Radio-Canada’s Jérôme, and countless travel series. 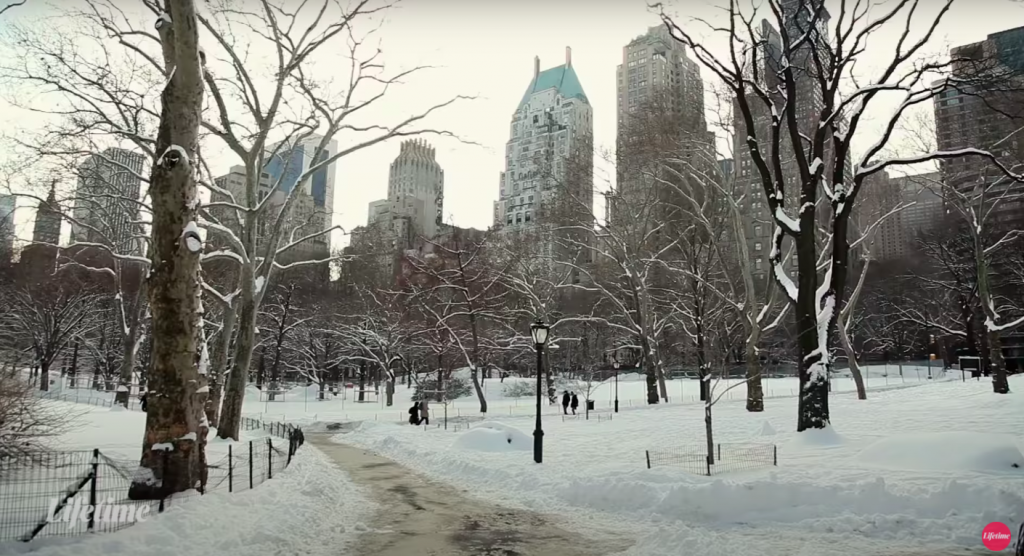 Still from ‘Christmas Unwrapped’ at Confederation Park [via YouTube]

Regardless if you’re a local or a visitor, the iconic view of the Parliament buildings and Chateau Laurier from the Laurier Avenue Bridge is sure to take your breath away. The bridge, with its recognizable green steel arches, was constructed in 1900 to connect the east and west sides of the Rideau Canal. Adding to the bridge’s charm is a unique spiral staircase connecting Laurier Ave. West to the Rideau Canal Eastern Pathway below.

The bridge is a popular location for travel videos and photos, and for set-in-Ottawa series like the CBC’s Michael: Every Day; Laurier Ave. West, the spiral staircase, and the Rideau Canal Eastern Pathway are featured in the second season’s first episode. 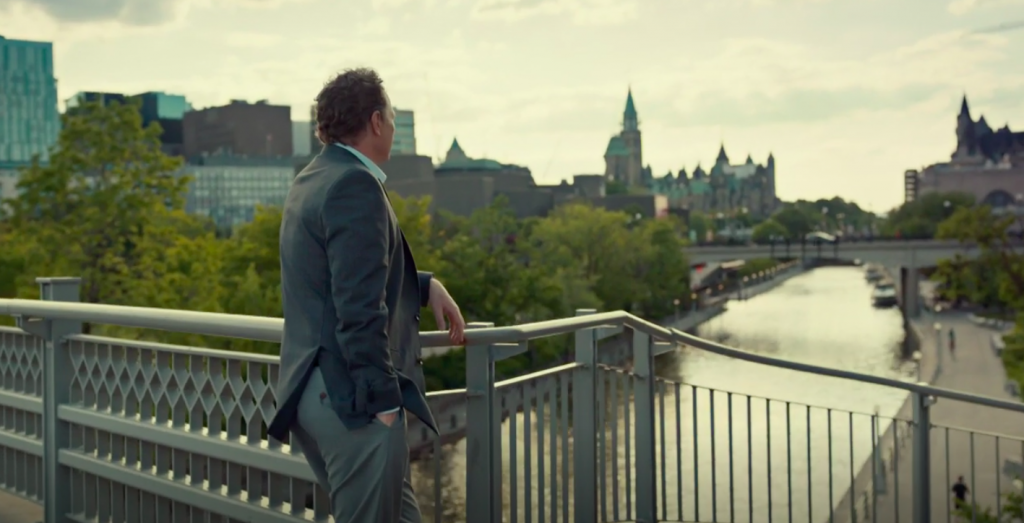 Still of Bob Martin in Season 2, Episode 1 of ‘Michael: Every Day’ [via CBC Gem]

Below the bridge is one of the city’s most identifiable assets: the Rideau Canal. Spanning a total of 202 kilometres, from the Ottawa River in Ottawa to Lake Ontario in Kingston, this UNESCO World Heritage Site was originally built in 1826-1832 for military purposes before transforming into an important shipping route. These days, the canal is enjoyed by boaters and paddlers while runners, cyclists, and walkers keep the bordering pathways in use. Once the canal freezes in the winter, it becomes the world’s largest skating rink with 7.8 kilometres to be explored on skates, making it a truly unique filming location.

Christmas movies like Christmas Jars and Hallmark’s A Cheerful Christmas filmed on the Rideau Canal Skateway, as did the French-language feature film C’est le coeur qui meurt en dernier. The latter, based on Robert Lalonde’s novel of the same name, went on to be nominated for six Canadian Screen Awards in 2018, including Best Motion Picture. 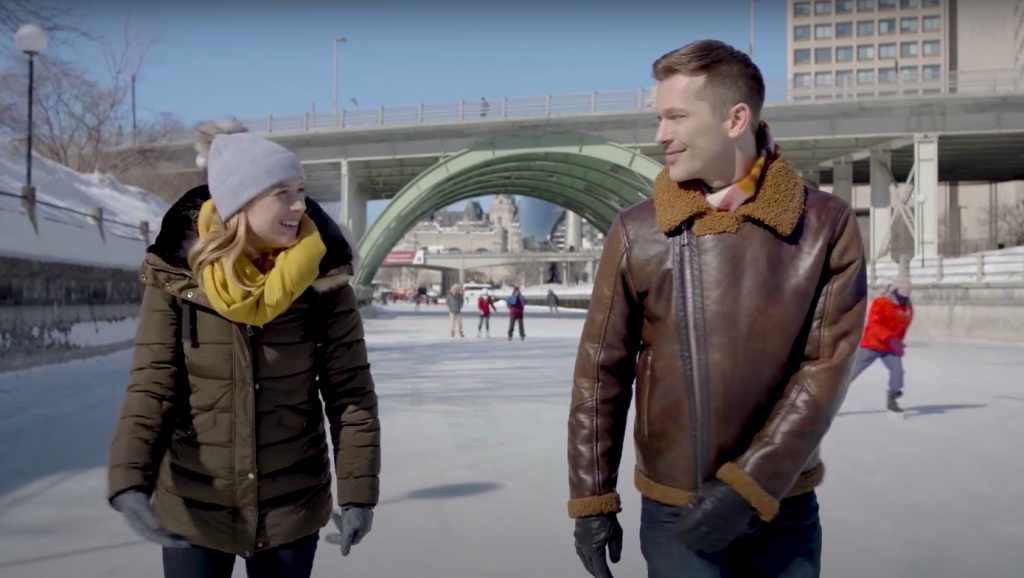 Erica Deutschman and Ottawa-born actor Chad Connell in Hallmark’s ‘A Cheerful Christmas’,
with the Laurier Avenue Bridge in the background [via YouTube]

It might surprise some to learn that City Hall is one of Centretown’s most popular filming locations. Comprised of two connected buildings, a modern wing built in 1990 and a heritage building, the site often hosts events and film shoots, especially in pre-COVID times. The heritage building, which now houses the mayor’s office, was built in 1874 to serve as the Ottawa Normal School, a teachers’ college.

Both the interiors and exteriors of Ottawa City Hall are frequently seen in film and television productions. The Lifetime movies Zombie at 17 and Terrified at 17 have filmed here, as have the Canadian series Michael: Every Day and Toi et moi (produced locally by Slalom). In early 2020, the Lifetime holiday movie Christmas Unwrapped filmed scenes on the Sens Rink of Dreams, located on Marion Dewar Plaza just outside City Hall. 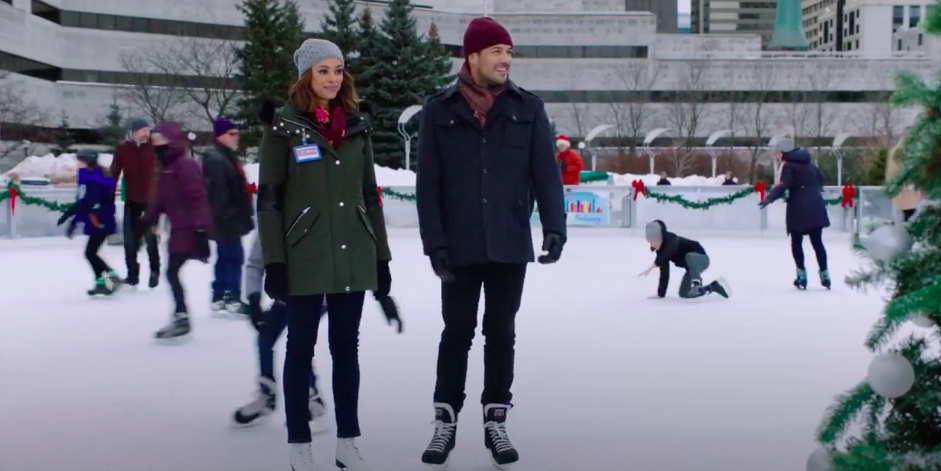 A few short blocks south of City Hall is Wine Rack, a wine shop selling Ontario wines. The shop has over 160 locations across the province and carries over 150 products including wine and cider. The Ontario Teachers’ Pension Plan acquired Constellation Brands (now called Arterra Wines Canada), the company that owned Wine Rack, in 2016 for approximately $1.03 billion.

Scenes from Penthouse North (a.k.a. Blindsided), which shot extensively in Centretown, were filmed at this location. You can currently stream the film through Cineplex or rent via your favourite streaming rental service.

Built in 1909 for lumber tycoon John R. Booth, the aptly named John R. Booth Residence (also called Booth House) is a stately mansion built in the Queen Anne Revival style. The property remained in Booth’s family following his death in 1925, until 1947 when it was purchased by the Laurentian Club of Ottawa. The Laurentian Club closed in 2000 and the building was purchased by Trinity Western University which turned it into the Laurentian Leadership Centre, a residential internship program.

Several television productions have filmed here, such as Slalom’s La malédiction de Jonathan Plourde and the CBC miniseries The Best Laid Plans, based on Terry Fallis’ award-winning novel of the same name.

In December 2011, the streets of Centretown were turned into New York City for the feature thriller Penthouse North (a.k.a. Blindsided), starring Michael Keaton and Michelle Monaghan. The exterior of the apartment building at 260 Metcalfe St. doubled for the main character’s Brooklyn apartment while interiors were built in a studio in Orléans.

Named The Mayfair, this seven-storey art deco building was built in 1930; using CGI, a few storeys were added in the film to make it appear more New York-like. You can currently rent the film through Cineplex or via your favourite streaming rental service. 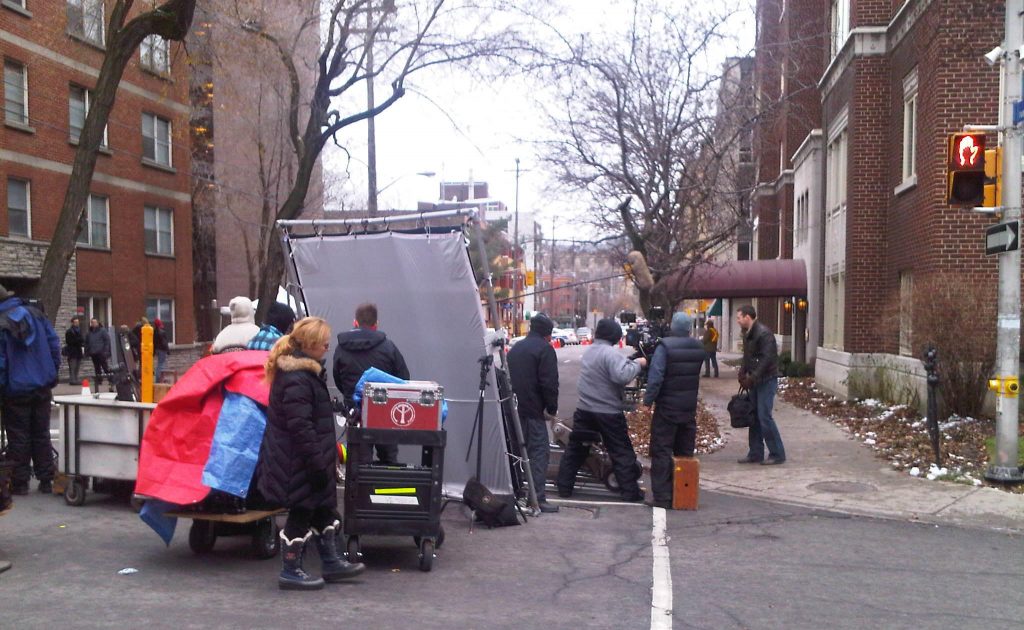 Filming ‘Penthouse North’ outside 260 Metcalfe St. (building on the right)
[Photo via 1310 News]

Conveniently located a block from The Mayfair is another location featured in Penthouse North, Minto Park. Occupying a city block, the park is a popular spot for dog walkers and others seeking some fresh air and a break from the hustle and bustle of downtown. Like several other local sites, monuments dot the park; here you’ll find a bust of Argentinian general José de San Martín, and Enclave: The Ottawa Women’s Monument which honours the lives of murdered women and girls.

A scene from Penthouse North, produced locally by Bunk 11 Pictures and Zed.film in late 2011 and early 2012, was filmed at Minto Park. 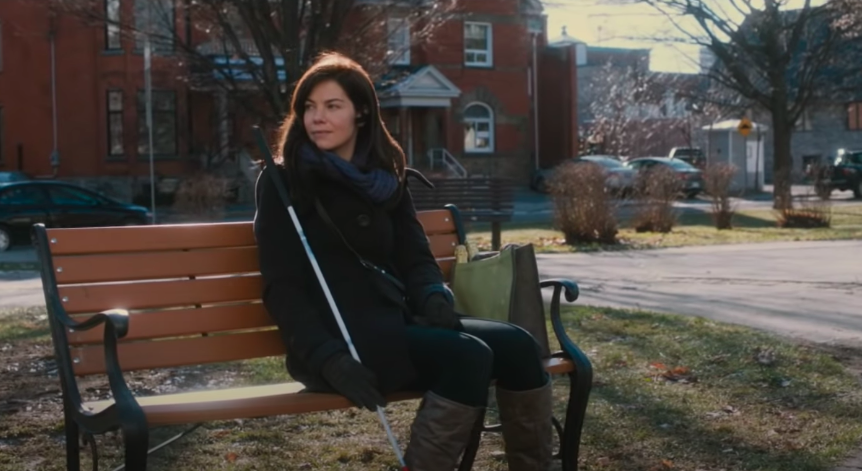 If you’ve made it this far, you might now be needing a caffeine boost or something sweet; thankfully, Happy Goat Coffee Company is our next stop and it’s just a few steps away. The coffee shop, with eight locations and even more retail partners, specializes in ethically sourced, direct-trade coffee.

In early 2020, the rom-com Midnight at the Magnolia filmed scenes at Happy Goat’s Elgin location. The film, directed by local director Maxwell McGuire, can be seen on Netflix in most countries (excluding Canada); it premiered here Dec.  3, 2020, on CTV Drama. 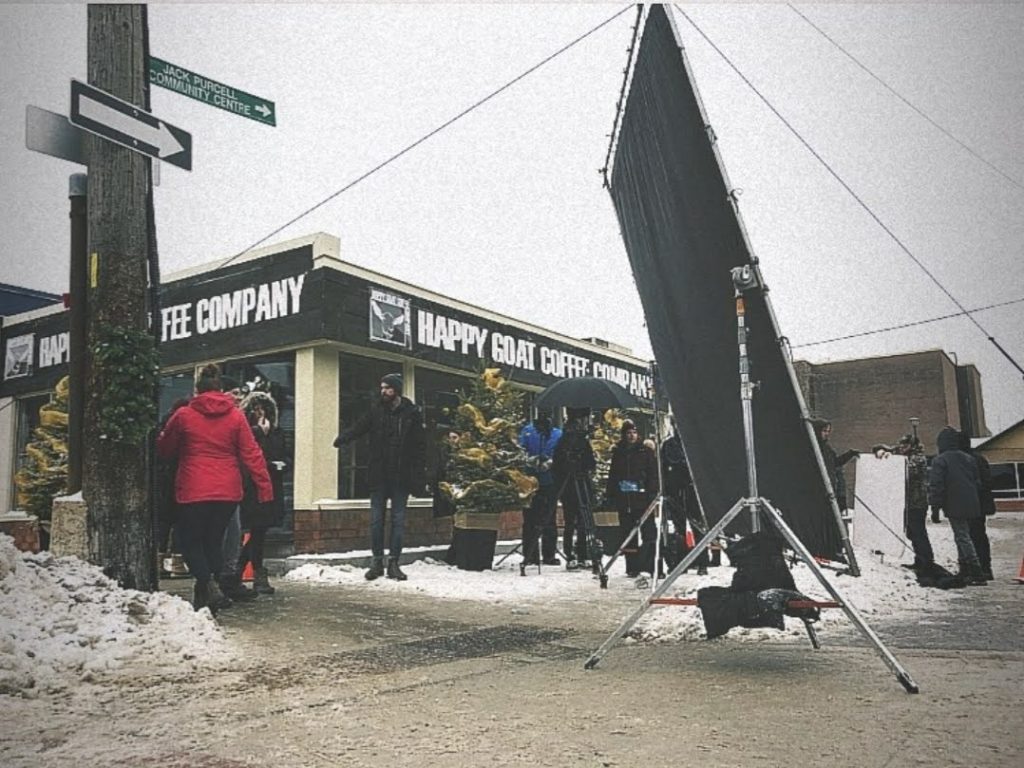 The Jack Purcell Community Centre is a City of Ottawa facility featuring a pool, weight room, and meeting rooms. In partnership with the non-profit Jack Purcell Recreation Association, several children’s and adult programs are offered here, such as camps and fitness and art classes. The centre, association, and adjacent park are named after an Ottawa resident who mended broken hockey sticks in his Centretown neighbourhood (not for the Guelph-born world champion badminton player of the same name).

Scenes for the second season of the CBC series Michael: Every Day were filmed at the community centre’s playground.

Still of Matt Watts and Tommie-Amber Pirie in Season 2, Episode 2 of
‘Michael: Every Day’ [via CBC Gem]

We now head to Bank St. for the first of our final two stops, also a Michael: Every Day location. Fauna is an award-winning restaurant serving small plates that have been described as Nouveau Canadian cuisine. It was launched in 2014 by chef and owner Jon Svasas who would later launch Bar Laurel in Hintonburg. The restaurant has received many accolades since it opened, including making Canada’s 100 Best Restaurants list in 2016, 2017, and 2019. 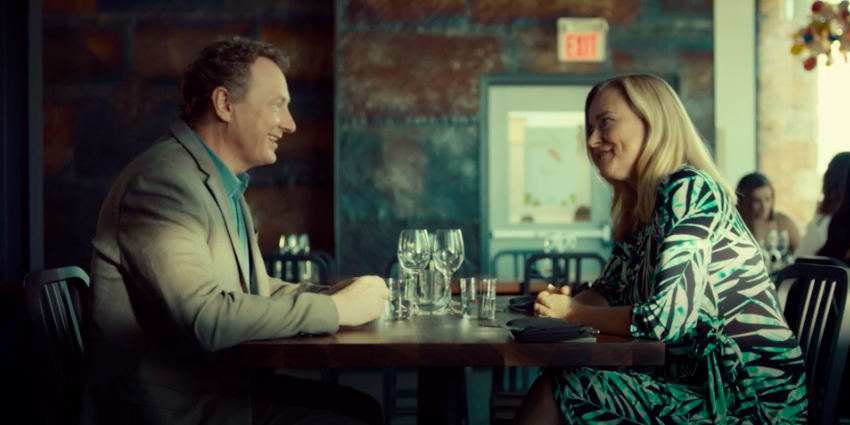 Still of Bob Martin and Jennifer Irwin in Season 2, Episode 3 of
‘Michael: Every Day’ [via CBC Gem]

Who doesn’t love a retro diner? Bramasole will have you grooving to 50s music surrounded by décor of the era, all while enjoying the appetizing classic breakfasts served every morning and early afternoon.

As you tuck into your bacon and eggs, enjoy knowing that Lifetime’s Christmas Unwrapped and the 2019 BYUtv movie Christmas Jars, based on Jason Wright’s best-selling novel, have shot near where you’re sitting; the latter even closed part of Bank St. to capture some exterior shots.

Back in Canada on the set of Christmas Jars. Such a talented cast. Such a terrific crew. Such an honor to observe. #christmasjars #christmasjarsmovie pic.twitter.com/iaBLVHsPsU