Nestled on the picturesque Rideau River just a short drive from downtown Ottawa, Manotick is a charming 150-year-old village abound with quaint shops, historic buildings, and sprawling estates. Further enticing filmmakers are the friendly residents and business owners who happily and proudly welcome film and television productions in their community. Manotick is also where Jam Filled, one of Ottawa’s largest animation studios, was founded in 2007, although the company has since expanded considerably from its original 400-square-foot attic. Looking for more rural charm? Venture further south to the communities of Burritts Rapids and Kemptville and see where actors like Nicholas Cage, Emma Roberts, and Kiernan Shipka have filmed.

The popular live-action/animated series Wild Kratts filmed in the park in 2014. The series follows the adventures of brothers Chris and Martin Kratt as they visit animal habitats in Ottawa and around the world, making science education fun for kids of all ages. This Emmy-nominated series is produced by Ottawa-based Kratt Brothers Company and Toronto’s 9 Story Media Group, and airs on TVO in Canada. You can watch episodes on TVOKids or YouTube.

After soaking in the tranquility of Beryl Gaffney Park, travel a bit further south, park the car (or lock up your bike), and start exploring Manotick on foot. Manotick Main St. is teeming with alluring restaurants and colourful buildings, providing a vibrant backdrop to leisurely strolls and film and TV productions.

While Oz Perkins’ directorial debut The Blackcoat’s Daughter mostly filmed in Kemptville, driving scenes took place on Manotick Main St. The film stars Kiernan Shipka and Lucy Boynton as stranded boarding school students dealing with a bit more than just homework, while a mysterious woman played by Emma Roberts tries to find her way to the school. You can stream the film, which was produced locally by Zed.film, on Amazon Prime Video. The 2015 Mayalam film Two Countries also filmed on and around Manotick Main St.

If you watched Candy Cane Christmas when it recently premiered on W Network, you may have noticed some adorable furry faces. In addition to Beverley Mitchell and Mark Ghanimé, the Lifetime movie stars some local pups and their human companions, scenes for which were filmed at the Village of Manotick Animal Hospital. The film was produced by Reel One Entertainment and Ottawa’s Steve Boisvert, and directed by local filmmaker Adrian Langley.

Several businesses in Manotick were featured in Candy Cane Christmas, including 692 Coffee and Bar, a beautiful, Instagram-worthy coffee shop serving Fluid Solar Roasted Coffee, craft beer, and yummy scones. The coffee shop was founded in 2018 by four friends in a 130-year-old building which has housed a hat shop, a dress shop, a barber shop, and more recently, Lindsay & McCaffrey general store and its subsequent clothing boutique (now located around the corner on Beaverwood Rd.).

We’re in a movie!!On Thursday January 16 the film crew of “Candy Cane Lane” will be using our coffee shop as one of…

Did you know there’s a shop in Ottawa dedicated to gingerbread? There is, and it’s fittingly located in Manotick, a real-life fairy tale town. The Gingerbread Man originated in Toronto in 1988 but relocated to Manotick in 2001. The shop sells gingerbread houses year-round as well as other tantalizing baked goods, including butter tarts which the owners boldly claim are the best in the world. Maybe you want to try them for yourself as Travelscope’s Joseph Rosendo did; the Gingerbread Man is one of several locations featured in the 11th season episode Cruising Canada: Ottawa and the Rideau Canal (skip to the 9:21 mark for the Gingerbread Man, or watch the Telly award-winning episode in its entirety for the full experience).

If casual dining is what you’re after, our next stop has you covered. The Black Dog Bistro offers guests a French-inspired menu in a relaxing atmosphere, while its cozy chic patio gives you a prime seat to enjoy the village’s beauty. This is one of the locations featured in the Lifetime movie Candy Cane Christmas.

As Chair of the Manotick BIA, I was invited on the set for this MOVIE, Candy Cane Christmas, that airs tomorrow night on…

Our last stop on the Candy Cane Christmas mini film tour is Terra Plants and Flowers, a gorgeous plant and flower shop. The shop sells indoor and outdoor plants and flower bouquet arrangements for any occasion (including film production!)

Watson’s Mill is an operational grist and flour mill that was built in the 1860s by Manotick founders Moss Kent Dickinson and Joseph Currier. Using the same technology as it did when it first opened, the mill is also a museum and historical centre, enlightening visitors on Manotick’s past. Some also say the building is haunted by the ghost of Ann Crosby Currier, Joseph Currier’s wife who died in a tragic accident in the mill when her dress caught in a revolving drive shaft.

The mill has been featured in several productions, especially documentaries exploring the Rideau Canal. The award-winning television series Travelscope filmed at Watson’s Mill in 2018 for its 11th season episode Cruising Canada: Ottawa and the Rideau Canal (skip to the 7:43 mark to see the mill in action). The four-hour TVO original documentary TRIPPING the Rideau Canal also filmed at the mill; the six accompanying VR 360 videos were created by Manotick-based Those Canadians.

Travelling south along scenic Prince of Wales Dr. you’ll soon find yourself at Strathmere, a charming retreat, spa, and wedding venue. The property boasts a stone farmhouse, a 150-year-old renovated barn, a garden house, a fruit orchard, meadows, and gardens. There are also 34 unique and cozy guest rooms onsite, should the sights and sounds of nature tempt you to stay longer than a day.

Directed by Maxwell McGuire, Love at Look Lodge filmed extensively at Strathmere in the fall of 2019, taking advantage of the peaceful setting and gorgeous autumn colours. The film stars Clark Backo (Letterkenny, Supernatural, Designated Survivor) and Jonathan Keltz (Reign, Entourage, Cardinal) and premiered on Hallmark and W Network in September 2020.

Just a short distance from Strathmere is the North Gower Client Service Centre. In 2017, the building doubled as a California bus station in the feature film First Light. You can currently watch the film, which was produced by Ottawa’s Bunk 11 Pictures, on Tubi or Super Channel. The sci-fi film stars Stefanie Scott as high school student Alex who, after developing supernatural abilities, goes on the run with her friend Sean, played by Théodore Pellerin.

Just outside the city’s boundaries is the peaceful community of Kemptville, located in the Municipality of North Grenville. Kemptville has attracted several productions in recent years, including 2019’s Turkey Drop, a Thanksgiving-themed holiday film for Walt Disney Television’s Freeform. The film shot at several locations in Ottawa and the surrounding region, choosing independent grocer B&H in Kemptville due to its ability to portray different sets, the owner’s accommodating nature, and ample parking, as Assistant Location Manager Matthew Cassidy explains in this article. The film stars Olivia Holt and Cheryl Hines, and was directed by celebrated Canadian filmmaker Jerry Ciccoritti.

The majority of Oz Perkins’ 2015 directorial debut The Blackcoat’s Daughter filmed at the Kemptville Campus. The campus was developed in 1916 as the Kemptville Agricultural School, offering students courses in agricultural and rural trades, and later became part of the University of Guelph’s Ontario Agricultural College. The campus sat vacant for a few years when courses stopped in 2014; it’s now owned by the Municipality of North Grenville which operates it as an educational and multi-use facility. The campus encompasses 630 acres and 17 buildings, woodlands, greenspace, green houses, a maple bush, trails, and other buildings such as sports facilities, a residence, and catering facilities. It’s no wonder the campus was chosen as the prep school setting for The Blackcoat’s Daughter. Other Kemptville locations featured in the film include Five Star Restaurant and Kemptville District Hospital; the hospital was also used for the Lifetime film His Fatal Fixation, produced by local production company Fireside Pictures and starring Ottawa’s own Sarah Fisher.

The feature film The Monster (a.k.a. There Are Monsters), starring Zoe Kazan and Scott Speedman, also shot on the grounds of the Kemptville campus in 2015.

Traveling west, you’ll soon find yourself in the small, quiet village of Burritts Rapids, one of the first settlements along the Rideau River. Colonel Stephen Burritt, who would later fight in the War of 1812, settled in the area in 1793 with his wife and son after seeing the water power potential for a mill. By the time construction on the Rideau Canal began in 1826, Burritts Rapids had become a bustling village boasting several businesses. 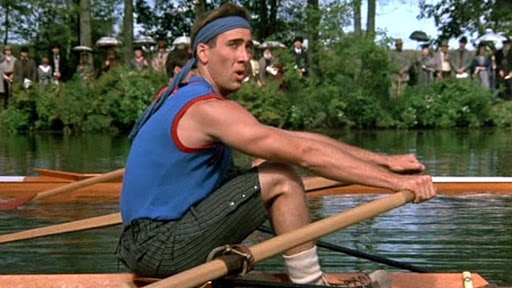 Nicholas Cage in ‘The Boy in Blue’

Colonel Burritt wasn’t the only one to see the potential of the mighty Rideau River. In 1984, the village was abuzz when the production of The Boy in Blue, starring a then up-and-coming actor by the name of Nicholas Cage, arrived in town. The film shot in the area for eight days, choosing the Rideau River as a stand-in for the River Thames in England. The film is based on the life of 19th century Toronto sculler Ned Hanlan (played by Cage), a world champion who was one of the first to successfully use the “sliding seat”, a modern invention at the time; Cynthia Dale and Christopher Plummer also starred in the film. The historic Burritt’s Rapids Community Hall, built in 1855 to serve as a general store, also benefited from the production – many of the materials used for an extension built in 1986 were donated by the production company.

Burritt House is a beautiful, neoclassical stone home built in 1832 by Daniel Burritt, Colonel Stephen Burritt’s brother. After Stephen’s death in 1859, the house and farm were inherited by his son but by 1905 no longer belonged to the Burritt family. The waterfront home was purchased in the 1960s by its current owners who have lovingly restored the residence.

The house and surrounding area, doubling for Cumberland, were featured in the CBC miniseries The Best Laid Plans, based on Terry Fallis’ award-winning novel. The set-in-Ottawa series filmed all over the city in 2013, including Parliament Hill, the University of Ottawa, and at the Burritt House which was used for one of the main characters’ residence. A satirical look at federal politics, The Best Laid Plans starred Jonas Chernick, Kenneth Walsh, and Ottawa’s own Mark McKinney, and went on to win two Canadian Screen Awards. 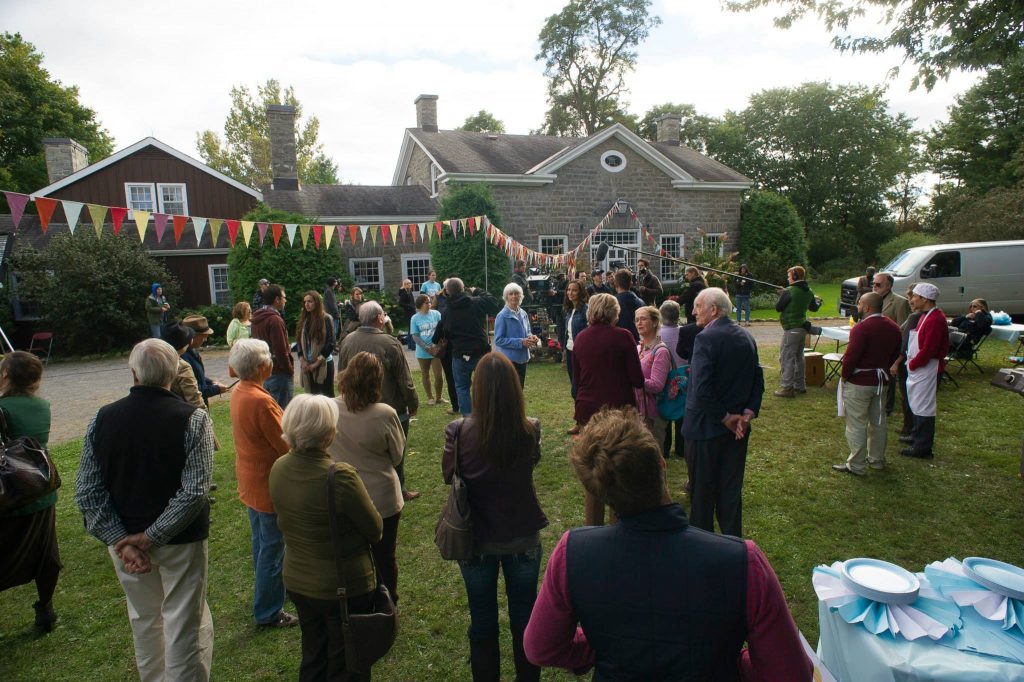 The final stop on our tour of Ottawa’s southern rural communities is Saunders Farm, a sustainability-oriented 100-acre farm attraction and fall staple for kids of all ages. Each October, the farm’s Haunting Season and FrightFest events attract thousands of guests seeking a thrilling experience complete with hayrides, parades, live shows, a pumpkin patch, and unique play structures. With six haunted attractions, Saunders Farm is the perfect setting for a horror movie, as the feature film Hurt discovered.

Hurt, which premiered at the Fantasia Film Festival in 2018, was shot around Ottawa in 2017 and produced by Blumhouse and Ottawa’s Zed.film. The film takes place on Halloween night in a small Texas town as newly married couple Rose (Emily Van Raay) and Tommy (Andrew Creer) cope with Tommy’s recent return from war. Several scenes were filmed at Saunders Farm, allowing the cast and crew to fully immerse themselves in the eerie surroundings. Local television series such as GAPC Entertainment’s Prime Radicals and Nish Media’s Hit the Ice, have also filmed at the farm.