Little Italy, or Corso Italia in Italian, is a culturally rich neighbourhood located southwest of Ottawa’s downtown core. The area was originally settled around 1900 by Italian immigrants, with a second-wave of Italian and European immigrants arriving after the Second World War. Today, Little Italy boasts a diverse selection of international cuisines, long-standing family businesses, and independent shops. Cultural events and festivals, like Italian Week Ottawa and La Vendemmia, enhance the neighbourhood’s vibrant lifestyle, attracting residents and tourists to Preston St. and the surrounding area.

Starting at the southern edge of the neighbourhood, we find ourselves in the peaceful surroundings of Commissioners Park. The almost 9-hectare park, managed by the National Capital Commission, was built between the 1920s and 1950s on the former site of J.R. Booth’s lumberyard. Each spring, park visitors are greeted by an array of over 250,000 colourful tulips which are replaced by vibrant annual flowers come summer. Dow’s Lake provides a romantic backdrop for picnics, leisurely strolls and filming, while those more adventure-inclined can admire the view from the water on a rented kayak, canoe or stand-up paddle board.

As one of the official sites of the Canadian Tulip Festival, Commissioners Park often attracts travel series and other unscripted content. Slalom Productions filmed scenes in the park during the 2016 festival for its series Voyage organisé, a Unis TV documentary series which follows senior tour groups. The TFO youth quiz series Boum, c’est canon also filmed here during its second season. 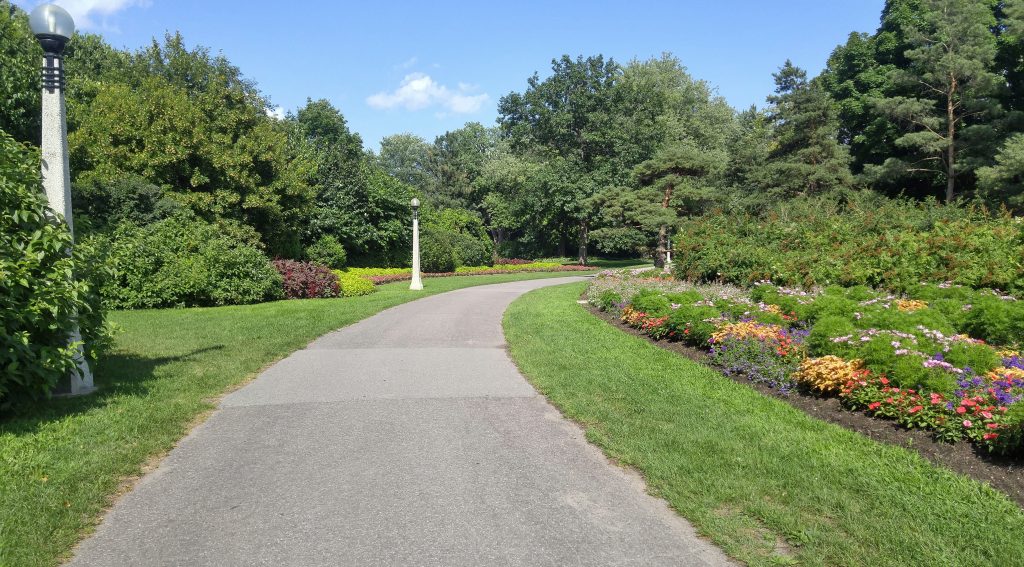 After soaking in the tranquility and beauty of Commissioners Park, head north on Preston St. where a metal “Little Italy” arch formally welcomes you to the neighbourhood’s commercial district. The sign, lit in the colours of the Italian flag, was installed in 2002 to lure visitors from the nearby Dow’s Lake area.

It’s no surprise that the sign and Little Italy were featured in Nate Estabrooks’ feature film Mangiacake. The film stars Ottawa’s own Melanie Scrofano and Christina Cuffari (who co-wrote the script with Estabrooks) as Italian-Canadian sisters who move back home and must confront their tenuous relationship. 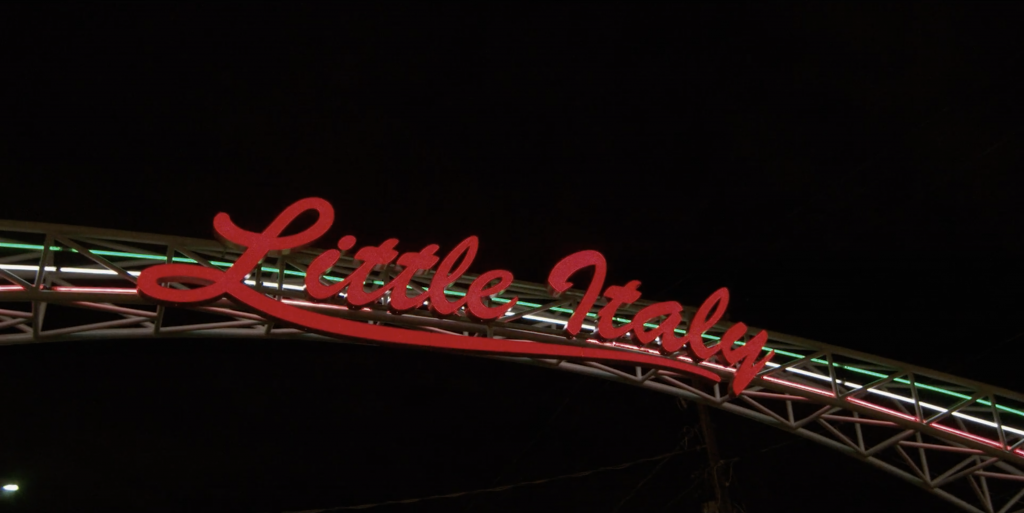 Still from the feature film “Mangiacake”

Veer off Preston St. at Pamilla St. to discover SPAO: Photographic Arts Centre, a visual arts institution offering the only 2-year photographic arts diploma in Canada. The centre’s gallery, the only independent space in the city dedicated to photographic and video art, exhibits works created by SPAO’s students and alumni, while an artist residency provides mentorship and support to photo-based artists.

SPAO’s exterior doubled for a nightclub in the Hallmark Movies & Mysteries film Matchmaker Mysteries: A Killer Engagement, starring Danica McKellar and Victor Webster. The film was produced by Ottawa’s Fireside Pictures and shot in Ottawa in the summer of 2019. 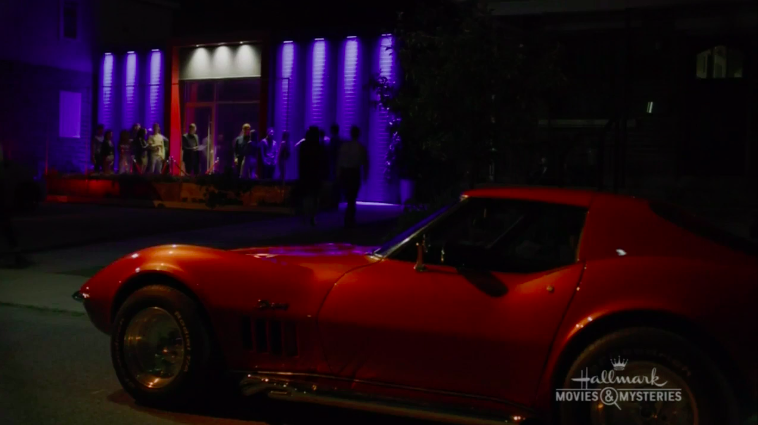 Screenshot from the film “Matchmaker Mysteries: A Killer Engagement”

The Black Cat Bistro was a popular restaurant in Ottawa spanning three decades and a few different locations, most recently in Little Italy. The restaurant closed in 2017 and the building now houses Mati, a restaurant specializing in Mediterranean cuisine.

The romantic comedy Hit by Lightning, starring Jon Cryer and Will Sasso, filmed scenes at the Black Cat Bistro in 2013; you can see the former restaurant on screen by renting or buying the film on iTunes. Other productions that filmed here include the Lifetime movies The Guest She Found Online and Mommy’s Little Girl. 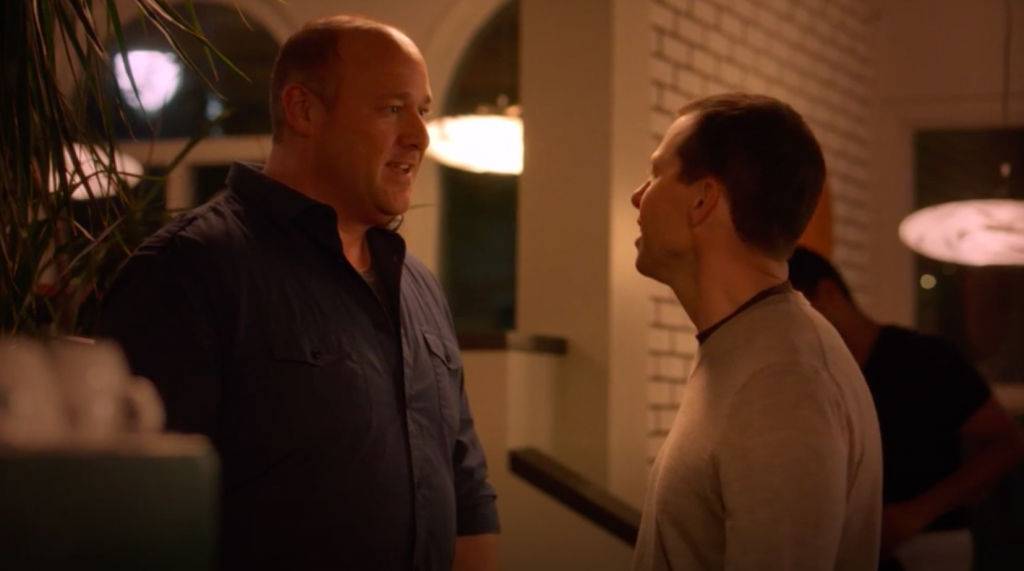 Still of Will Sasso and Jon Cryer in “Hit by Lightning”, shot at former restaurant Black Cat Bistro

Our next stop is 80 Aberdeen, the former home of Invest Ottawa and the Ottawa Film Office. The OFO was housed here between 2012 and 2016 when it was part of Invest Ottawa, before moving to Bayview Yards and its current home in the ByWard Market.

The 2014 CBC miniseries The Best Laid Plans, based on Terry Fallis’ novel of the same name, filmed scenes in the OFO’s former offices. A satirical look at federal politics, the series starred Jonas Chernick, Kenneth Welsh, Ottawa-born actor Mark McKinney, and a wealth of other Canadian talent, and was set here in the capital. 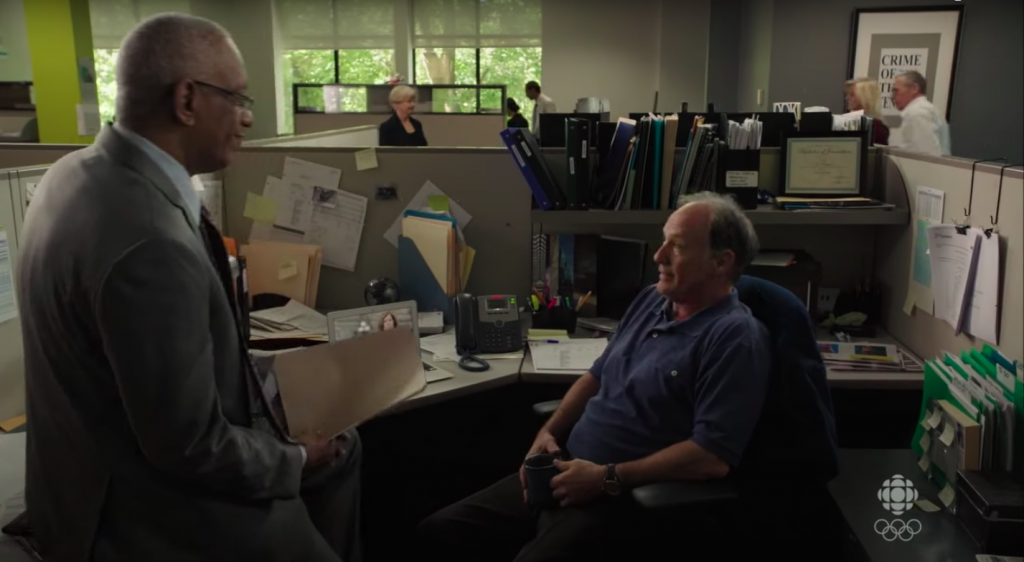 Philip Akin and Ron Lea in “The Best Laid Plans” episode 2, filmed in the OFO’s former offices at 80 Aberdeen St.

Many Ottawa locals might be surprised to learn that the first family of reality TV once filmed scenes in Ottawa. In the 10th season episode Somewhere Over the Cuckoo’s Nest, Khloe Kardashian, Scott Disick and other cast members of Keeping Up With The Kardashians flew to Ottawa to appear at a Halloween party. Although the party was held at the Shaw Centre, the cast stopped by Giovanni’s to enjoy some dinner and drinks. You can rent the episode on Apple TV or on Prime Video with a hayu subscription.

Right next door to Giovanni’s you’ll find La Favorita, a restaurant serving up gourmet pizzas, calzones, pasta and other Italian fare. The restaurant first opened in 1986 as a small take-out spot before expanding to its current size.

The Hallmark Movies & Mysteries film Matchmaker Mysteries: A Killer Engagement filmed at La Favorita in the summer of 2019. 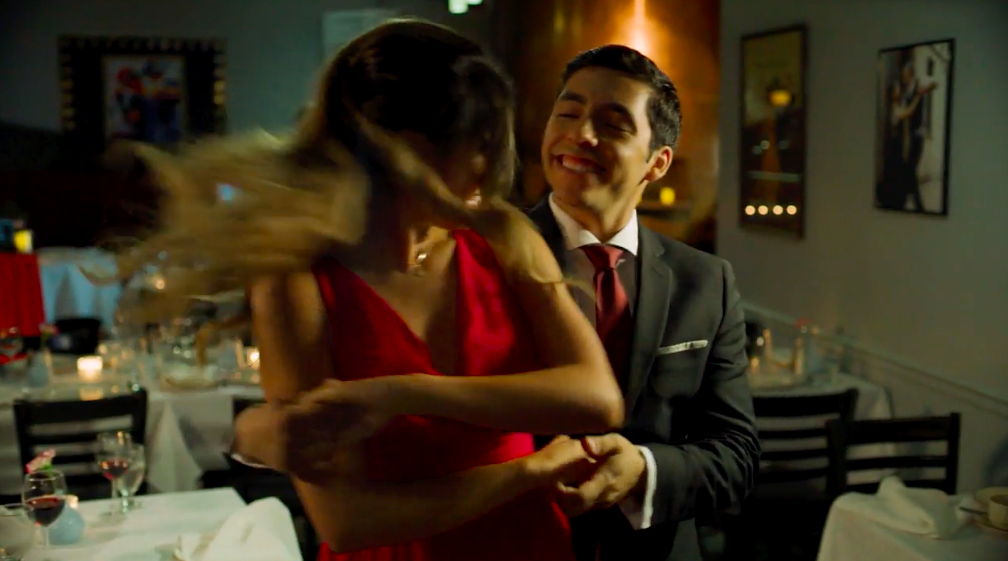 If traditional Canadian comfort food is what you’re after, you’ll find it here at Flapjacks. Offering all-day breakfast and other diner staples, you’re sure to leave happy, full, and ready to explore more filming locations.

In 2019, the restaurant hosted the production of UPtv’s Rock N’ Roll Christmas, starring Beverley Mitchell and Catherine Mary Stewart. The film was directed by Ottawa’s Maxwell McGuire and produced by local production company 1 Department Entertainment Services. You can currently stream the film (for free) on CBC Gem. 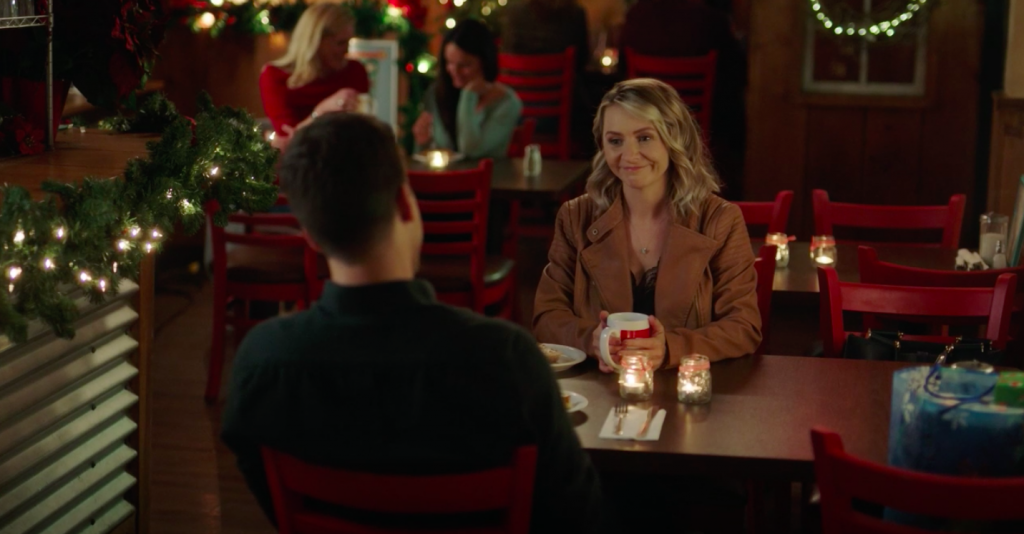 Preston Square is a mixed-used space boasting two 11-storey office towers, a four-storey building, and a residential building. Pure Kitchen, Heart & Crown, Sun Life Financial, and Adobe are just a few of the tenants that have settled here.

The Hallmark film Double Holiday, produced by Muse Entertainment with 1 Department Entertainment Services, filmed exterior and interior scenes here in 2019. The film stars Carly Pope and Kristoffer Polaha as colleagues competing for the same promotion. The movie is available for purchase on iTunes. 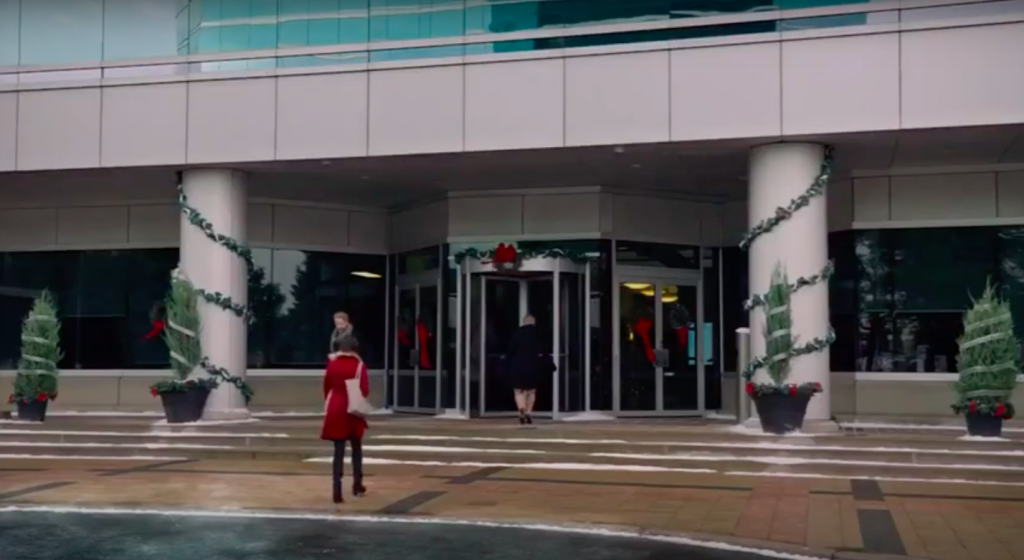 The Corso Italia mural, located on the underpass of Highway 417, is perhaps Little Italy’s most iconic spot. The large mural features several panels depicting the families, businesses, and events that have contributed to the neighbourhood’s rich cultural fabric. Sponsored by the Preston Street BIA, the mural was planned by Joe Cotroneo and painted by local artist Karole Marois in 2007. It was the first mural in Ontario to be permitted on a Ministry of Transportation structure.

You can catch a glimpse of the mural in Nate Estabrooks’ feature Mangiacake, starring Melanie Scrofano and Christina Cuffari (who co-wrote the script with Estabrooks). 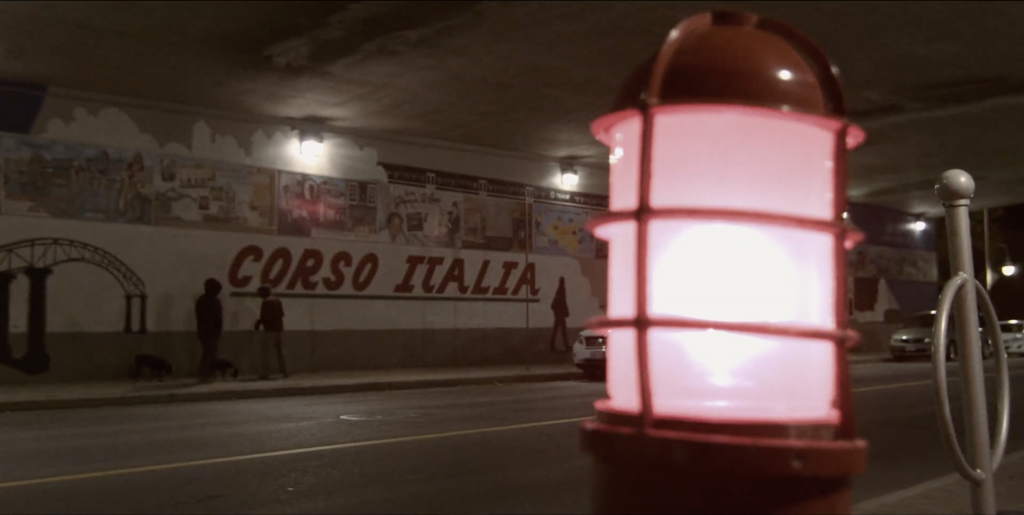 Shot in and around Ottawa in the winter of 2020, right before the pandemic shut down the industry, Fatman was one of the biggest productions to film in the region in recent years. The action-comedy stars Mel Gibson, Walton Goggins, and Marianne Jean-Baptiste and centres on an unconventional Santa Claus trying to save his declining business.

The feature film shot at several locations in Ottawa, including the City of Ottawa Traffic Operations facility, the final stop on our Little Italy film tour. The building houses the city’s traffic control centre from where city staff can view and control traffic lights across the city. The building doubled as a post office in Fatman, available to rent or buy on Prime Video, iTunes, Google Play and other streaming platforms. 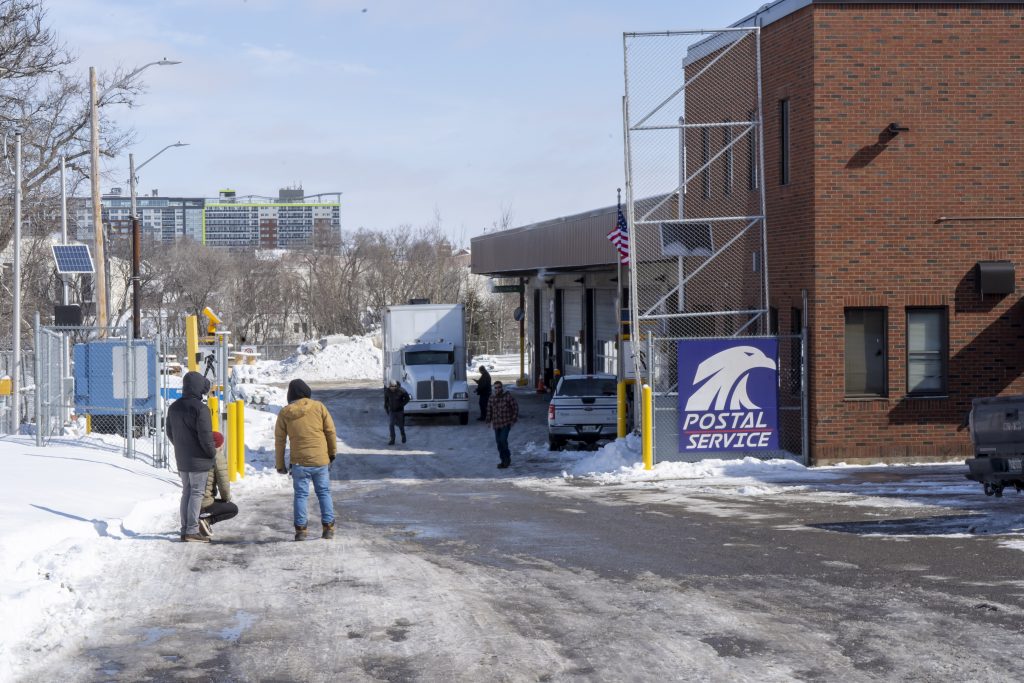 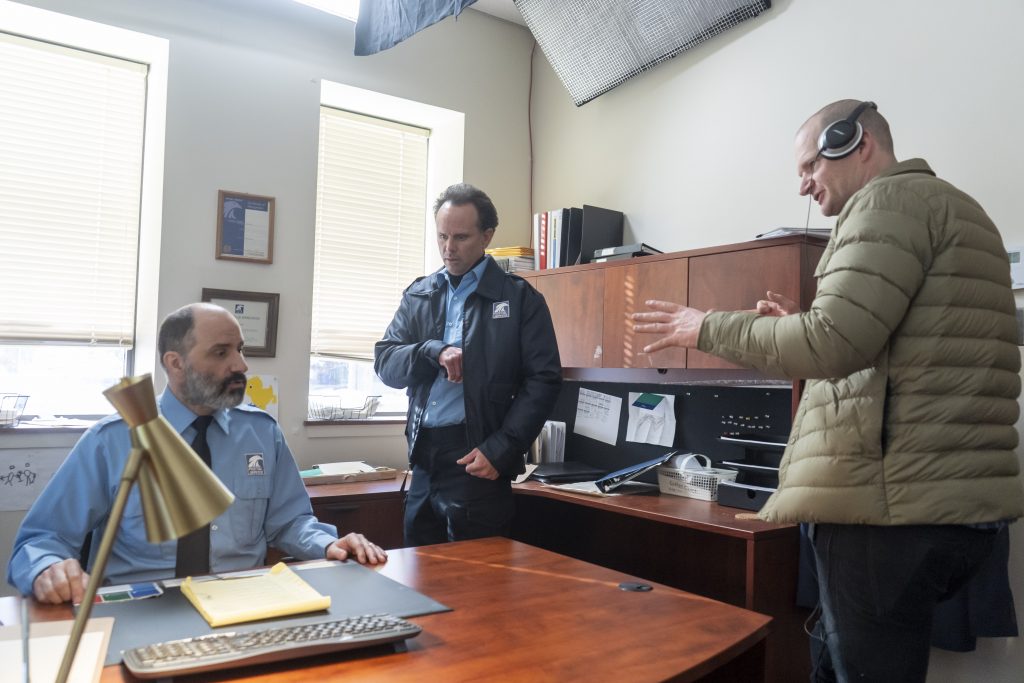