Whether you’re an emerging or established filmmaker, the health and safety of your cast and crew should always be a top priority, especially when filming during a pandemic. Our new Set Safety 101 blog series will help equip newer filmmakers with the information and resources they need to maintain safe sets, while offering a refresher for more seasoned crew.

Many of the topics for this blog series, including this first one on firearms, will be inspired by the Safety Guidelines for the Film and Television Industry in Ontario. Regardless of your position in the film industry, we encourage you to read through the guidelines and understand your responsibilities and duties as a producer, production manager, director, or other worker. 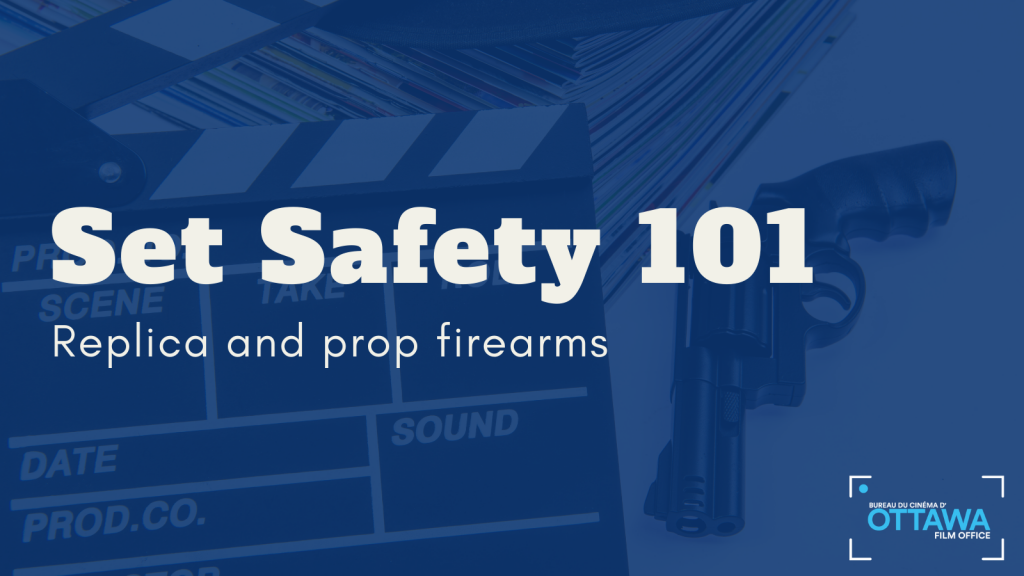 On-screen weapons often bring an element of danger or urgency to stories, playing an integral role in many action, crime, and thriller films and TV shows. As viewers, it’s entertaining to watch the action unfold on screen; however, as filmmakers and crew members, it’s important to understand the safety measures that are required to allow these types of scenes to take place.

Regardless if you’re filming with a real, replica or prop gun, on public or private property, you will need to notify the City of Ottawa and obtain a filming permit. This requirement is governed by the Film By-law and supported by the City of Ottawa Film Guidelines, which state:

“Any filming events involving gunfire audible to the public, or firearms or replica weapons of any kind (including prop guns) visible to the public (whether fired or not), are required to submit a Film Permit Application and may be required to have an Ottawa Police Paid Duty Officer onsite.”

Event Central is the coordinating body for all filming approvals and works closely with other municipal departments, as well as the Ottawa Police Service (OPS), to ensure all relevant stakeholders are aware of upcoming filming activity. The importance of notifying city officials when filming on public (and in some instances, private) property cannot be overstated, especially when the filming activity can cause passersby to panic and call 911. There are several examples, in Ottawa, Oakville, and elsewhere, of police receiving calls regarding firearms or emergency vehicles without the caller being aware it’s for a film production. To help avoid or minimize these types of calls, filmmakers must also notify neighbouring residents and businesses in advance of their filming activity. This is required for all film permits but becomes especially important when stunts, weapons, uniformed officers or emergency vehicles are involved.

In all cases, permission should always be obtained by the property owner, whether that’s the City of Ottawa, federal government or private landowners. Contact our office if you’re unclear as to who owns the location you wish to film at, and we’ll happily guide you in the right direction.

While obtaining the proper permits is important, it’s far from the only action you should take when a weapon will be on set. Below you’ll find a few other steps you should be incorporating, as well as valuable resources for additional information.

Planning your shoot
Properly planning your shoot will help mitigate financial and logistical concerns down the road. You should know fairly early on (after reading or writing the script) when and what type of weapon will be present, and the kind of location needed for the scene. These details should be reflected in your budget under the firearms/armaments, locations, and props line items. You should also be budgeting for an armourer or licensed property master, depending on the weapon to be used. And if you know the scene takes place in a public space, budget for police services (more on than in a bit).

Pre-production meetings which include your armourer and municipal authorities can help facilitate the logistical aspects of your shoot; with everyone on the same page from the very beginning, you may find the film permit process simplified.

Working with a weapons handler
As stated in the Firearms Safety Guideline for the Film and Television Industry in Ontario, replica weapons should always be considered first over practical ones. If production decides to proceed with a real firearm, they then will need to hire a weapons handler (sometimes called a gun handler, weapons master, firearms safety coordinator or armourer). The weapons handler, who must have the licences and certifications mandated by the Firearms Act, is responsible for all weapons brought on set, including checking, cleaning, and storing guns, and training actors on their proper usage.

Replica firearms
You are not required to hire a gun handler if you’re using a replica firearm; in that case, your props master or company should be in possession of a valid Firearms Business License as replica firearms are prohibited under the Firearms Act. The Criminal Code defines a replica firearm as “any device that is designed or intended to exactly resemble, or to resemble with near precision, a firearm, and that itself is not a firearm,” and excludes replicas of antique firearms. Replica firearms include airguns (often referred to as BB guns, pellet guns, spring guns or airsoft guns) that fire a .20g 6mm plastic pellet, with a muzzle velocity below 111.6 meters (366 feet) per second. Bill C-21, if passed, would update the Criminal Code’s definition of a replica firearm to include airguns that fire a projectile between 366 and 500 fps, and which look like a real, modern firearm; these devices are currently unregulated.

Using blanks
Additional precautions need to be considered when blank ammunition is to be used on set. For one, blanks designed specifically for the motion picture industry should always be used. Everyone on set should be notified before any shots are fired, and a shatterproof clear plastic shield should be placed between the firing weapon and the camera crew. The weapons handler should always test the weapon before it’s fired, and ensure the actor is aware of the proper handling and firing techniques. Blanks should never be fired at close range as doing so can have disastrous, if not fatal consequences, such as what happened to the actor Jon-Erik Hexum. 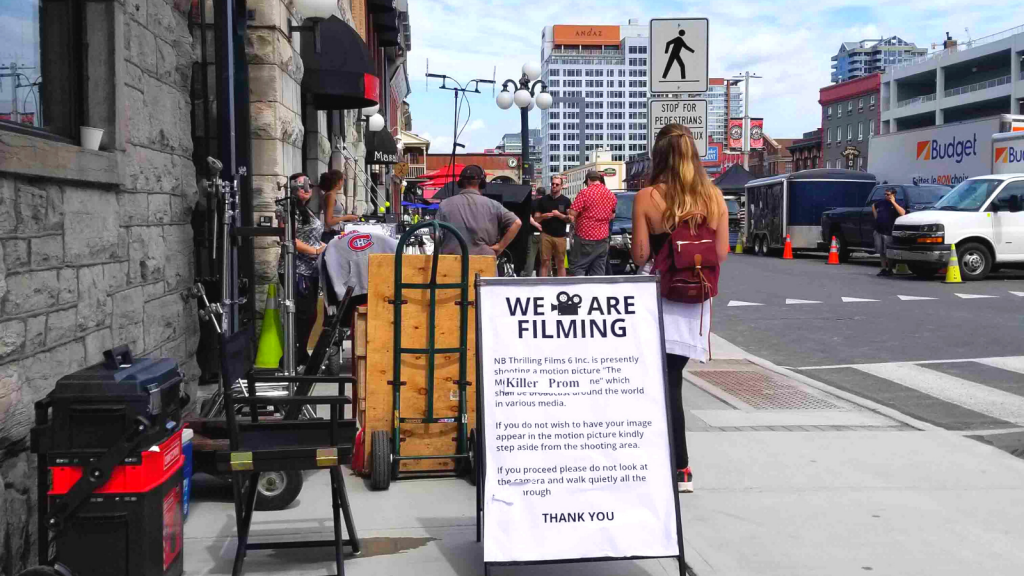 ‘Filming in Progress’ sign
Whether filming on public or private property, it’s best practice to have a ‘filming in progress’ sign or sandwich board clearly visible near your set. This alerts passersby that by entering a certain area, they’re providing consent to have their image appear in the production. The added benefit of having the sign onsite is in the event that it’s not immediately clear that filming is taking place; for example, if you’re filming an armed robbery with most of your crew and equipment placed inside a location, with only the actor outside. This exact situation happened in Indiana and resulted in police officers being called to the set and firing a missed shot at the actor.

Hiring a paid duty officer
Depending on the scope of your filming activity, you may be required to hire a paid duty officer (PDO), especially if shots are audibly fired or the weapon will be in view of the public. Not only can the PDO’s presence help minimize concerns by onlookers, the officer maintains in contact with the communications centre to notify them when and where the shot is about to be fired. In cases where the weapon will not be seen or heard by the public, it may be sufficient to advise Event Central who will in turn inform OPS and its communications centre. The best way to coordinate the presence of a PDO for your filming event is to apply through Event Central; they can provide an initial assessment of the scope of your filming and provide a paid duty application form, if necessary. Permit applications requiring a PDO must be submitted at least 10 business days in advance.

If you have any concerns about on-set safety, or have a topic you’d like to suggest for a future blog post, send us an email at [email protected].