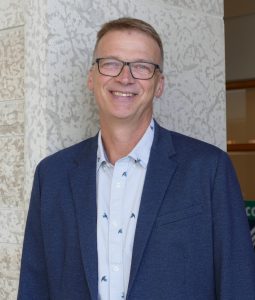 Don completed his Bachelor of Arts (Honours in Geography) at Carleton University in 1987 and Master’s in Urban and Regional Planning at Queen’s University in 1989. Don is a registered professional planner and has spent the past 30 years employed with the former cities of Ottawa, Nepean and the Regional Municipality of Ottawa-Carleton, and since 2001 in various managerial positions with the amalgamated City of Ottawa. Don currently serves the City as the Director of Economic Development and Long Range Planning which provides financial, film permitting and film-friendly policy initiatives support to the Ottawa Film Office.

Don has provided leadership on a number of key City-building files including the new The Ottawa Hospital campus, Lebreton Flats, and the Zibi development on Chaudière Island. Don is also active in serving the community as a volunteer including many years of coaching minor hockey and Little League baseball.

Don has been a resident of Ottawa for his entire life. Don and Anita Herweyer have been blessed with three wonderful children: Rebecca, Darren and Lauren.