The Ottawa Film Office (OFO) is a non-profit organization, funded by the City of Ottawa, whose mandate is to attract and support film and television production in Canada’s capital. This vibrant and growing sector creates hundreds of local jobs, contributes over $100 million to the local economy each year, and strengthens the creative, cultural, and economic fabric of this dynamic city.

The city has, over the next four years, an opportunity to significantly grow the local film, television, and animation industry. With support from municipal government, the OFO anticipates that should the following four discussion points be realized, a minimum of an incremental $40 million will be spent in the Ottawa region per year on local labour, goods, and services.

Demand for soundstages is far exceeding available space in Ontario, so much so that Toronto saw 530,000 square feet of expanded and new studio space in 2021, with more on the way. Northern Ontario also recently announced soundstage projects which will attract more productions to their regions.

The advantages of soundstages are primarily the flexibility, control, and speed they offer. Lights and cameras can be easily rigged, power is available, soundproofing prevents multiple takes by interfering external noise, the floor surface is smooth for dolly moves, and the walls are movable, allowing for camera placement and movement. High ceilings allow aerial crane shots and set construction. Parking is usually available as well as office space and amenities. In climates such as Ottawa’s where weather conditions necessitate the demand for enclosed space, a soundstage can also serve to extend a city or region’s production season. Newer technologies, such as LED walls, allow productions to benefit from the growing trend of virtual production, helping to attract equipment suppliers and other companies to the region.

With no soundstage space, and very little available warehouse space, Ottawa’s live-action  production industry is limited to location-based movies of the week (MOW’s), independent films, and low-budget series production. The OFO has been working on developing a purpose-built soundstage, which would be the first in Eastern Ontario, since 2017. The National Capital Commission (NCC) continues to express interest in leasing the already-serviced land at the former Greenbelt Research Farm, which was the initial site proposed for the soundstage.

A soundstage will help our region’s ability to attract bigger budget productions and international coproductions, especially dramatic TV series which provide long-term employment for a city’s residents. This project would conservatively create 400 new jobs and increase local production levels by at least $40 million per year. This type of infrastructure supports training and professional development, encourages cross-sector collaboration, and eases some of the constraints experienced by on-location filming by moving filming activity and production trucks out of residential neighbourhoods. By incorporating environmentally responsible practices, a purpose-built soundstage would also support the city’s commitment to sustainability and climate action.

The City of Ottawa has been a supportive and collaborative partner throughout this project. In addition to city staff’s assistance in the rezoning and planning phases, the Finance and Economic Development Committee unanimously approved in March of 2020 a $40 million loan to the OFO to help accelerate the start of construction; due to COVID-19, this item was never brought forward to Council.

We are asking the new Mayor and Council to continue to support the development of this key infrastructure project.

A jurisdiction’s film-friendliness, that is its ability and commitment to accommodate film and television productions, is paramount to attracting new productions. Ease and cost of film permits, timelines, flexibility, and access to both private and public locations all play an important role in making a city an attractive production destination.

The City of Ottawa’s Film By-Law, implemented in 2020 to streamline the film permitting process, has changed the way productions obtain film permits. While this change has mostly been positive, producers have voiced concerns that it has also led to some challenges, such as longer turnaround times for permits and fees for late permit applications. As filming activity increases and live events return, there is also additional pressure on popular filming and parking locations.

The OFO maintains a positive relationship with Event Central which oversees the implementation of the Film By-Law, notably the issuance of film permits. The OFO will continue working with Event Central, as well as a Council, on establishing film-friendly initiatives that increase Ottawa’s attractiveness as a viable and cost-effective filming destination. One such initiative could be a joint economic trade mission to Los Angeles to meet with producers and promote filming in Ottawa, something other jurisdictions often do to attract productions to their regions.

As with virtually every sector, the film and television industry is impacted by a shortage of skilled labour. While post-secondary institutions such as Algonquin College, Collège La Cité, and Carleton University are training the next generation of crew, animators, and talent, it’s not enough to keep up with demand. Most graduates are finding work with local production companies; however, many are finding opportunities in bigger production centres such as Montréal, Toronto, and Vancouver.

The number of projects being produced in Ottawa keeps growing, as are the productions’ sizes and budgets. Training, supporting, retaining, and attracting a skilled, diverse, and inclusive workforce is vital to the industry’s continued success and growth. Almost 100 per cent of people who work on a film or television production in Ottawa are locals. They live here, work here, are raising their families here. The OFO supports the Ottawa Board of Trade’s key priorities in its Build Up Ottawa campaign, including the importance of increasing accessibility and affordability of homes. Ottawa’s screen-based production sector would benefit, directly or indirectly, from all of OBoT’s overarching business community priorities.

Ensuring housing is affordable, for current and prospective residents, is one way the City can support this growing industry. We also envision the City playing a key role in efforts to brand Ottawa as a creative and affordable city in which to live and work. The OFO looks forward to working with the City and different stakeholders, such as Invest Ottawa, Ottawa Tourism, and the BIAs, to promote Ottawa as a vibrant, attractive city.

Lastly, due to provincial tax incentive legislation, Gatineau-based residents are rarely given the opportunity to work on live-action and animation productions in Ottawa. While we understand the sensitivities of the province giving tax credits towards residents who live outside Ontario, it’s also important to understand that the National Capital Region is a unique area, and should be treated as such by both Ontario and Québec. Many Gatineau and Western Québec residents work in Ottawa, and vice versa, and we believe this should apply to the film, television, and animation industry as well. The City of Ottawa’s support in establishing the National Capital Region as an integrated economic region, for the purposes of accessing provincial tax incentives and other benefits, is instrumental.

Every sector plays a role in the fight against climate change. Many production companies across Canada have adopted sustainable initiatives on their sets, in their offices, and in their studios; however, there’s a lingering perception that incorporating green practices can be difficult and expensive. We’re encouraged by the work being done by organizations like Ontario Creates and its Ontario Green Screen initiative to promote sustainability in the film industry; however, initiatives at the municipal level are needed to create a more environmentally sustainable local industry.

We would like to see the City provide additional support to encourage sustainable practices on film sets. One such action would be the creation of fixed electrical stations (“power drops”), similar to what the city of Toronto recently launched. Power drops, as well as the ability to tie-in to the City’s existing electrical grid, reduce harmful carbon emissions caused by diesel generators (which are also noisy and costly). The OFO looks forward to working with the new Mayor, Council, and staff to brainstorm ideas that will support and incentivize sustainability in the fast-growing film and television industry.

Due to robust provincial health and safety guidelines, the live-action production industry was able to not only continue, but thrive throughout the pandemic in Ontario. With content being consumed at unprecedented rates, local production companies kept up with demand from traditional networks and streamers to create new series and films. Indeed, from 2019 to 2021, local production spending increased by 45 per cent, from $28.5 million to $41.3 million. By the end of the third quarter of 2022, the live-action production sector already generated over $45 million in economic activity in the city this year*.

We thank all candidates for their future support of Ottawa’s thriving film, television, and animation industry. We look forward to working with the new Council, through collaboration, engagement, and transparency, to ensure the continued success of this growing sector and key economic driver.

*Data only reflects numbers that are shared with our office from Event Central and local producers in live-action production. It does not include productions that are not obtaining film permits from the City of Ottawa, or animation projects. 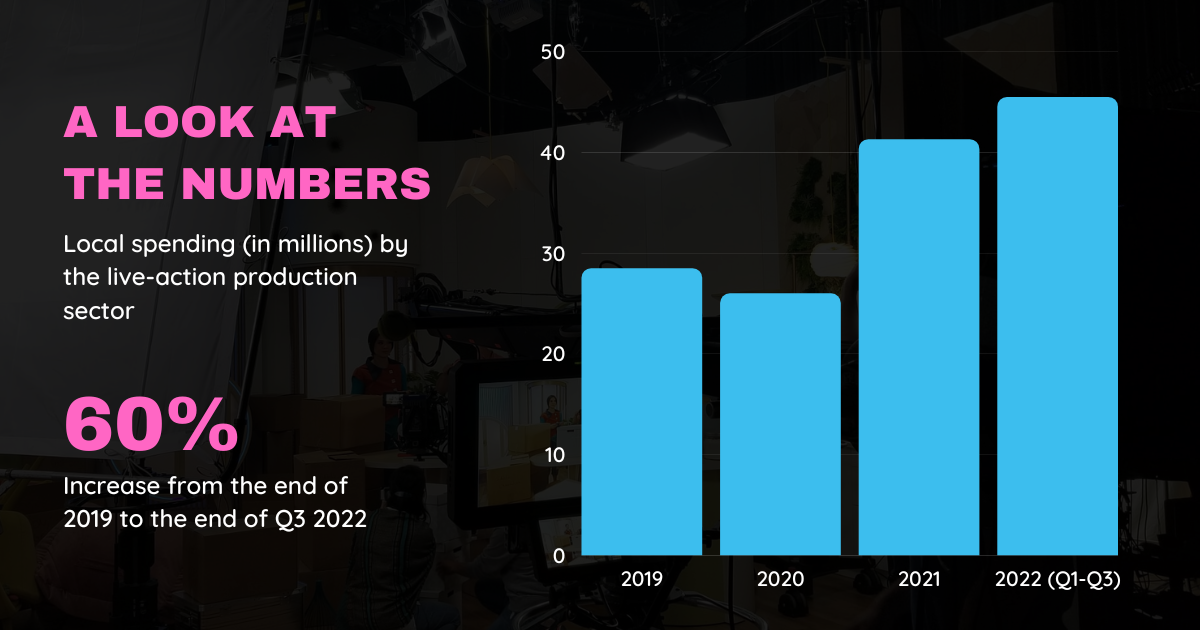